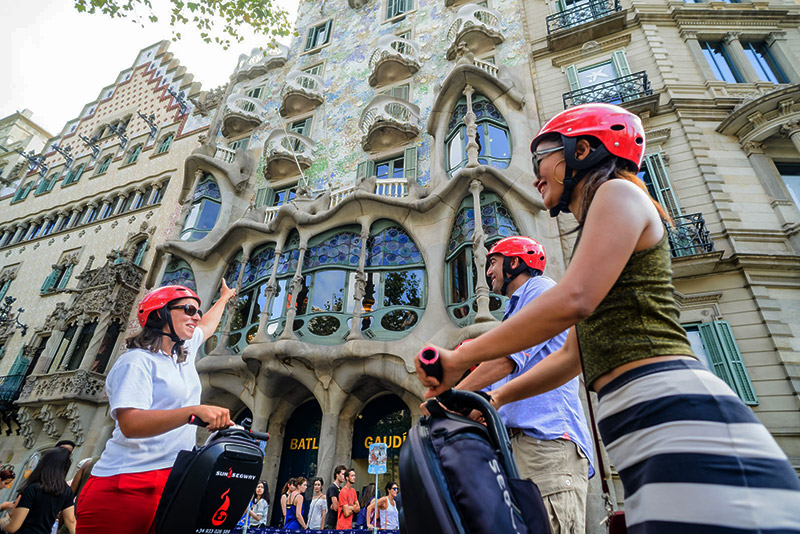 Casa Batlló is considered one of the most representative works of Antoni Gaudí i Cornet, the famous Catalan architect.

It stands at number 43 of “Paseo de Gracia” and was built as an order carried out by Josep Batlló in 1904. Batlló wanted to remodel a building to make it his new home.

However, Gaudí’s idea was much more ambitious: he was able to convince Batlló to keep the original structure (built in 1875), and only remodel the facade and the interiors. This is because the building was the work of Emili Sala i Cortés, who had been Gaudí’s teacher when he studied at the “Superior Technical School of Architecture of Barcelona”.

A bit of history about Casa Batlló

As we have already commented, the building was built by Sala in 1875. At that time, the architect had already built several buildings in Barcelona, such as the Casa Elizalde, the Duques de Bergara Hotel, the Pantheon of the Fargas Family, among others.

His idea was to tearthe building down and build a new one, but at Gaudí’s insistence, he finally agreed to have reformed. The main floor would be used for Batlló  with his wife and 5 children. The remaining floors would be be rented. However, as their children got married they occupied the different floors.

When Gaudí received the order from Batlló, he was already a renowned architect; he was working on several projects at the same time, such as in the Expiatory Temple of the Sagrada Familia or on the restoration of the Cathedral of Santa María de Palma de Mallorca.

With a few simple plans and drawings Gaudí realised that  it would be difficult  to carry out a project of such magnitude. To help, he would start using gypsum mock-ups adapting them to the desired shape. This way of working, although it will facilitate its conception of what the project was going to be like, it would complicate administrative procedures. Due to this and as a curiosity, the work license was not granted until 1912;, 6 years after the reform was over.

Casa Batlló is divided into three parts. However, all of them are so well integrated that it is very difficult to know when one begins and ends.

Experts say that the upper part looks like the back of a dragon. The reason for this is the use of ceramic pieces in the shape of scales, in addition to the great variety of colors that were used. In addition, the tower is a needle, which is associated with the spear of St. George ending in the dragon.

The central part is inspired by the Mediterranean Sea. On it we find a succession of fragments of crystals and ceramics. This part was designed by Gaudí in collaboration with Josep María Jujol. In addition, to complement such beauty, on the facade we can find balconies and railings of cast iron and marble.

Finally, the lower part (the main floor), is formed by a large gallery with 5 windows. The entire structure is supported through 8 columns.

As a curiosity, this structure reminds us of an open mouth, which initially caused this house to be known as the “House of the Yawns”.

Your visit to Casa Batlló

If you still do not know Barcelona, Casa Batlló is one of those essential places that you absolutely have to visit. Each corner is a work of art, transporting our senses to a magical world.

In the visit we will be able to see the Noble Floor (the floor in which the members of the Batlló family lived), the Roof, the Chimneys (with the representation of Sant Jordi defeating the dragon), the Attic (where the laundry rooms are which were the storage rooms originally), and the Garden of Lights (the neighbor’s staircase).

The price for adults is € 24.50, for children between 7-18 years it is € 21.50 and for children under 7 years it is free. There are also special prices for residents, students (with a student card) and for seniors.

Discover the wonders of our greatest Catalan architect, through our Gaudí Segway Tour.

On our Segways, you will get to know in an easy, comfortable and fun way, some of the creations of the greatest representative of Modernism in Europe, such as the Sagrada Familia, Casa Milà, Casa Batlló, and how Gaudi dedicated his whole life to modernist architecture in Barcelona.

As good hosts, we will guide you through Barcelona touring his works, and we will show you how Gaudí revolutionized public opinion with his architecture.

With this Tour to Catalan Modernism you will know the true essence of Antoni Gaudí and Barcelona!