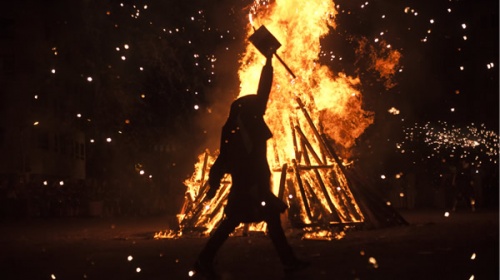 The Revetlla de Sant Joan, held on 23 June, is one of the most traditional festivals in the Països Catalans [Catalan Countries]. The main features of these celebrations are bonfires, music, dancing and coca tarts. A lot of Barcelona organisations hold revetlla celebrations in the city’s streets and squares, with orchestras, dancing and, in some cases, bonfires. Petards, or firecrackers, are a pyrotechnical device which, when lit, detonate producing sound and light. They are normally composed of a tube, made of flimsy material like paper or cardboard, and full of gunpowder or another explosive material. When the tube is closed, a wick is left on one end so that it can be lit safely. The power and light effect of the firework is variable and depends on the explosive charge.

Like gunpowder, fireworks were invented in the 9th century in China. Although many products that use gunpowder have a military application, fireworks immediately took on a festive dimension and were used for pyrotechnic displays. In this way, they arrived in Europe in the Middle Ages. Today, there are many different kinds of fireworks which are usually classified according to their power: snaps, sparklers, volcanoes, aerial fireworks, display fireworks, firecrackers, bangers, rockets, battery fireworks, and so on.

Fireworks are closely linked to summer parties, particularly the night of Sant Joan, or St John. This festival is dominated by the idea that fire purifies, protects and regenerates. Barcelona has a long tradition of lighting bonfires and setting off fireworks throughout this night, when kilos of fireworks are detonated giving off their characteristic sound and light.