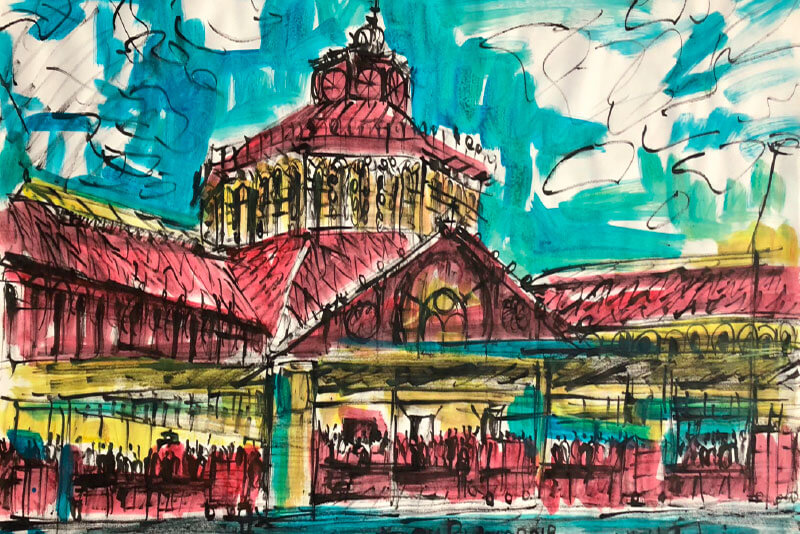 The Mercat de Sant Antoni is one of the most important markets of the city of Barcelona. It is the only market that has commercial offer during the 7 days of the week. The building and its surroundings host the three markets that are its own: fresh food, charms and Sunday book.

Originally it was an open-air market located in the southern access of the walled city of Barcelona, ​​specifically in the portal of Sant Antoni. The location was then favorable to trade because it was a transit area for those who left or arrived. With the projects of expansion of the city and the demolition of the walls, Ildefons Cerdà proposed the construction of a structure to guarantee the permanence of the market and improve the supply of the entire city of Barcelona that did not have enough with the markets within the walls.

In this way the architect Antoni Rovira i Trias was proposed the projection of the San Antonio Market facilities. This project was framed in the development of the Cerdà Plan and involved the creation of the first market on the outskirts of the city. The construction began in 1879 and ended in September 1882 inaugurated by the then mayor Rius i Taulet. Then, at the beginning of the 20th century, textile merchants from Parallel and other non-food products began to move around the market to take advantage of the attendance of people and improve their commercial activity. This is how the Market of the Encants de Sant Antoni was born.

Until today, both markets coexist, complement each other and contribute with their offer to generate a very dynamic retail area that is difficult to reproduce anywhere else. In this way the Mercat de Sant Antoni continues to offer one of the richest and most diverse fresh food offerings in the city and the Sant Antoni Encants Market offers a wide range of fashion, textiles and home products.

Sundays and collectors would also be incorporated on Sundays, giving rise to the Sunday Market of Sant Antoni. Today is a market specialized in new and old books and traditional collecting of postcards, stamps or magazines and where you will also find all kinds of offer linked to new hobbies and collections such as stickers, video games or movies.

In 2007, the works to reform the facilities begin. Three temporary tents are installed to accommodate each of the markets in Ronda Sant Antoni and Calle del Comte Urgell. In 2009, the facilities are permanently closed and a project that would suffer several delays due to the different findings and conservation tasks that were made in the excavation process begins. Archaeological remains of the Via Augusta Romana and the necropolis are discovered as well as the remains of the bastion of San Antonio.