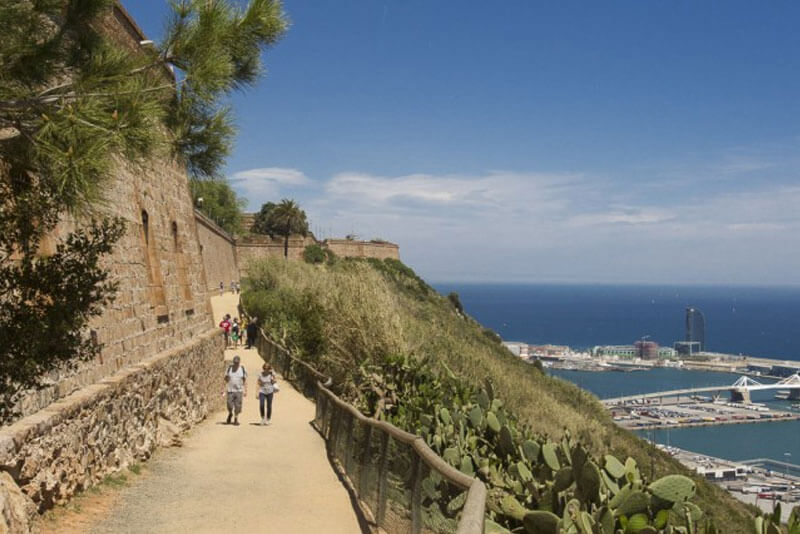 If you want to get an exceptional view of Barcelona, Mirador del Migdia is one of the best places for that. And, for anyone keen on walking, the park is full of paths that allow you to take a stroll on the south side of Montjuïc.

The landscaping has made this park look more like a wood than a garden. It is fully exposed to the sun so the light there is intense, while zigzagging paths climb up and down the sloping ground, joining the mirador-balconies with their magnificent panoramic view of Barcelona.
This a very good park for walking or spending a relaxing day in, with its large picnic area shaded by pine trees and a bar for contemplating some exceptional sunsets.

Mirador del Migdia occupies one of the last sectors still awaiting to be developed at the end of the 20th century on the southern slope of Montjuïc. The park was planned at the same time as the 199 Games Olympic Ring, which is also on the mountain.

It lies at one end of a series of parks and gardens covering Montjuïc, between the Zona Franca and the Marina del Port and Poble-sec neighbourhoods. Heading towards Poble-Sec the first you come across, next to Parc del Mirador del Migdia, is the Jardí Botànic, or the Botanical Gardens. Next is the new part of the Tres Pins nursery, followed by the Jardins de Mossèn Cinto Verdaguer and the Jardins de Joan Brossa, with the Jardins del Mirador de l’Alcalde just above. This makes for a good excursion which is has even more appeal if you do it the other way: starting from Mirador de l’Alcalde and finishing with a good picnic at Mirador del Migdia.