Warning: "continue" targeting switch is equivalent to "break". Did you mean to use "continue 2"? in /home/barcelo3/public_html/wp-content/plugins/revslider/includes/operations.class.php on line 2715

Warning: "continue" targeting switch is equivalent to "break". Did you mean to use "continue 2"? in /home/barcelo3/public_html/wp-content/plugins/revslider/includes/operations.class.php on line 2719

Warning: "continue" targeting switch is equivalent to "break". Did you mean to use "continue 2"? in /home/barcelo3/public_html/wp-content/plugins/revslider/includes/output.class.php on line 3615 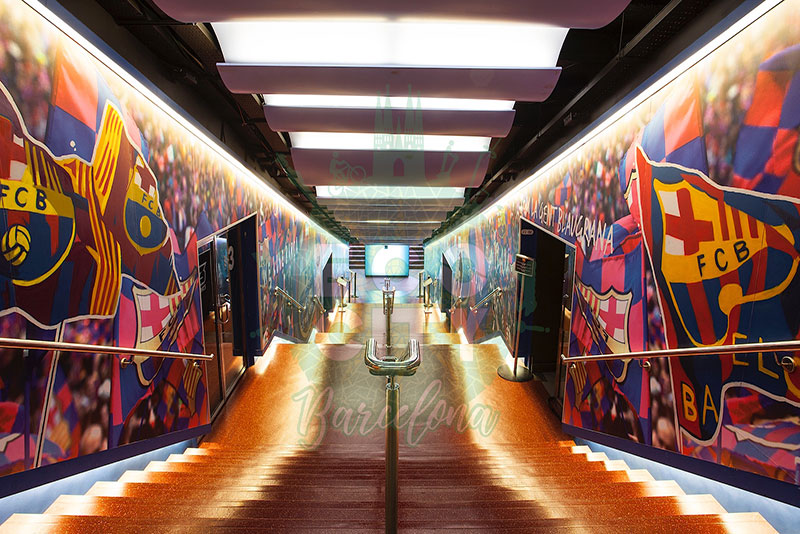 The Barcelona Football Club Museum is a museum located in the facilities of the Camp Nou, in Barcelona, which exhibits all the trophies achieved by all the Catalan club’s sports sections throughout history, as well as all kinds of objects related to their teams, players and social mass. It is the most visited museum in Catalonia. It was renamed “Museu President Núñez” in 2000, during the presidency of Joan Gaspart, and in honor of former president José Luis Núñez, founder of the museum.

The restructuring saw the museum split into three separate sections with a 3D cinema, audiovisual touch-screen, and information on the history of FC Barcelona. Since then the museum can only be visited by booking the package Camp Nou Experience, which includes the entrance to the museum and a tour of the stadium. The first section includes a collection of photos, documents and trophies detailing the club’s history on an interactive glass wall, allowing visitors to touch the screens and see information wall. The glass wall, equipped with laser technology, allows the exhibition of video, images and music through user-feedback. The second section is a private art collection on permanent display at the museum which exhibits works by local artists such as Dalí, Miró and Tàpies. In the third section, the Futbolart Collection displays football memorabilia from the club including a trophy-room with every trophy, or a replica thereof, that the club has won.

One of the items at display in the Futbolart Collection is the boots with which Ronald Koeman scored the winning goal in the 1992 European Cup Final, which he did in the 111th minute against Sampdoria, 21 minutes into extra time, securing Barcelona’s first European trophy.

History
The Museu de la club azulgrana was inaugurated on September 24, 1984, involved an investment of nearly 70 million pesetas and initially occupied a space of 950 m², divided into two floors. In 1987 he underwent the first remodeling, with the expansion of the art fund, but it was in 1994 when he grew more substantially, by doubling his former surface and include news such as, among others, the Center for Documentation Barcelonista.

There was a third remodeling throughout the 1997-1998 season, which expanded the increasingly ambitious work to 3550 m² and in which a ramp was built connecting the Museu with the Botiga. In addition, the museum has permanent exhibition Futbolart Collection, owned by Pablo Ornaque, and considered one of the best private collections in the world on football, with objects of all kinds, some of incalculable value. Currently the Museum is divided into four areas: the historical museum, the art collection, the Futbolart collection and the temporary exhibitions.

It has taken such dimension that during the last years it is the most visited of Catalonia, above the Dalí Museum of Figueres and the Picasso Museum of Barcelona. In addition, 84.1% of visitors to the Museum are tourists. At the state level, it is only surpassed by the Prado Museum in Madrid and the Reina Sofía National Art Center Museum.

The Museum offers the possibility of a guided tour that, in addition to the entrance to the museum, allows visiting spaces normally restricted to the public. The guided tour allows access to the presidential box, so that any visitor can enjoy the spectacular views of the Camp Nou, sitting in the presidential seat, the changing rooms, the press rooms, and the grass of the field.

In addition to the objects related to the history of FC Barcelona, ​​the Museum also has an artistic background with sports-themed works by prestigious artists: Salvador Dalí, Joan Miró, Antoni Tàpies, José Segrelles and Josep María Subirachs.

On June 13, 2010 the remodeling works of the museum were completed in two phases. In the first phase, a new multimedia space adapted to the 21st century was inaugurated, with more emotion and avant-garde technology. There are 1500 m² distributed in six interactive spaces where the emotions, the experiences and the sporting results of the Barça of these last times are the main protagonists. This new space has a spectacular screen with an audiovisual projection of 35 meters in length, an interactive table of more than 10 m² of surface that reproduces nearly 200 historical moments of the club, 16 headphones that reproduce all the sounds of the Barça environment, the anthem of FC Barcelona translated into 33 languages ​​or the 50 best goals projected on LCD screens.

In the second phase, the intervention took place on the first floor and gave rise to a new, more modern, modern and spectacular museum, where you can enjoy the trophies won by the first football team and by the professional sections throughout. the history. It is a collection of objects that reaffirm such a long career and that allow us to meet personalities and social actions that have helped this club to be what defines us with the motto more than a club. The itinerary of the Tour was also remodeled, with a much more attractive circuit, with exciting sounds in the stadium’s exit tunnel and press booths, with backlit shots that allow the visitor to walk through the history of F. C. Barcelona.

It is a new and current image that has been baptized with the name of Camp Nou Experience.

On this website own and third party cookies with operational and analytical reasons are used. If you continue to use this site it will mean that you agree.I agreeRead more