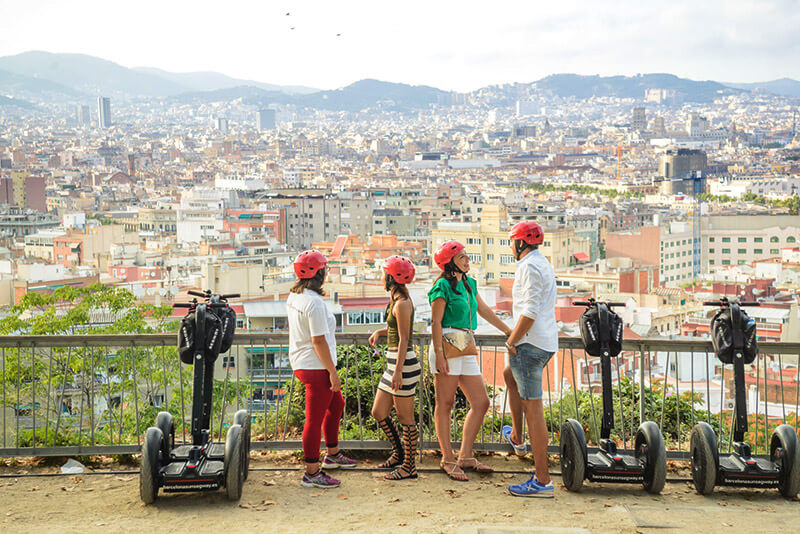 Montjuïc is one of the main attractions of Barcelona. It is impossible to stop contemplating it during our entire stay in the city and, of course, we can not abandon it without having explored it.
In the following lines we are going to analyze some of their particular:

The name Montjuïc literally means Mount Jewry and receives this name for a very curious reason, although somewhat gloomy. In the Middle Ages it would be used by Jews who lived in the Jewish quarter of the city.

Thanks to its strategic position, in this area the Castle of Montjuïc was built (around the 18th century). This monument would be used initially for surveillance and control of the area. From the great height that it reaches, you can watch in detail the entry of ships into the city from the sea.

The mountain has hosted important events in history, such as the work carried out to give shape to the Universal Exposition (1929), or the Olympics in Barcelona (1992).

Precisely because of this event, other important buildings were erected there, such as the Palau de Sant Jordi, the Olympic Stadium, the Olympic Pools, among many others. Here you will find important museums, architecture that will not leave you indifferent, large green areas, a viewpoint from which we can have the best views of the city, even a cable car to move easily through the mountains.

Points of interest in Montjuïc mountain

If you decide to climb the mountain, then you can not forget to appreciate these monuments:

The “Magic Fountain” is a popular stage for lights and water. It has been there for 80 years and still continues to surprise visitors. It is located between the Plaza de España and the Art Museum of Catalonia.

As we have already mentioned, this impressive military fortress would once be built for surveillance work due to the panoramic view it offers of the Barcelona sea entrance. Currently, it is used simply as a viewpoint from which we can get the best snapshots of the area.
To access the castle of Montjuïc, either we do it walking, or we saved the effort and climbed walking.

The Spanish Village would be created in 1929 for the International Exhibition. It is a representation in which the most incredible corners of a selection of towns of our country are reflected.

Impossible to miss it!

The Olympic Ring is composed of the following buildings: Lluís Companys Olympic Stadium, Bernat Picornell Swimming Pools and Calatrava Telecommunications Tower.
This ring was built in 1992, on the occasion of the celebration of the Olympic Games in Barcelona.

This museum is worth seeing, since in its interior we can find a complete collection of art, covering a great historical period.

Another of those places that we also have to visit in Barcelona. It is a complete space dedicated to the work of Miró. It has been designed with the aim of spreading the current art.

The botanical garden is made up of more than 2000 species of plants. As a curiosity, the garden is located in what used to be a municipal garbage dump, although, of course, now it has nothing to do with what it used to be.

How to get to Montjuïc mountain

To get to Montjuïc we are presented with different means of transport. Through them we can go directly to some neighborhoods, such as the Pueblo Seco.

If we want to get there by metro, we have several possibilities:
· From the Paral·lel station: You will have to take line L2 or L3.
· From the Plaza España station: Via lines L1, L3 and L8.
· From the Fira 1-MNAC station: This station is still under construction.

· Montjuïc Cable Car: More than a cable car, due to its structure, it is a cable car. It was inaugurated in 2007 and has 3 stations (Estación Parque de Montjuïc, Mirador and Castillo).
· Port cable car: This means of transport connects the Port of Barcelona with the Montjuïc mountain. It also has 3 stations (San Sebastián Tower, Jaime I Tower and Miramar Station). For its route is an incredible viewpoint that covers the entire city.

With these points of interest and indications you are ready to enjoy all that Montjuïc has to offer.

Discover the historic mountain of Montjuïc on Segway, and enjoy effortlessly the best views of the city and the coast of Barcelona.
Explore its parks, art galleries, museums and Olympic facilities, and you will see all the beauty that this mountain offers you with our exclusive Montjuic Segway Tour