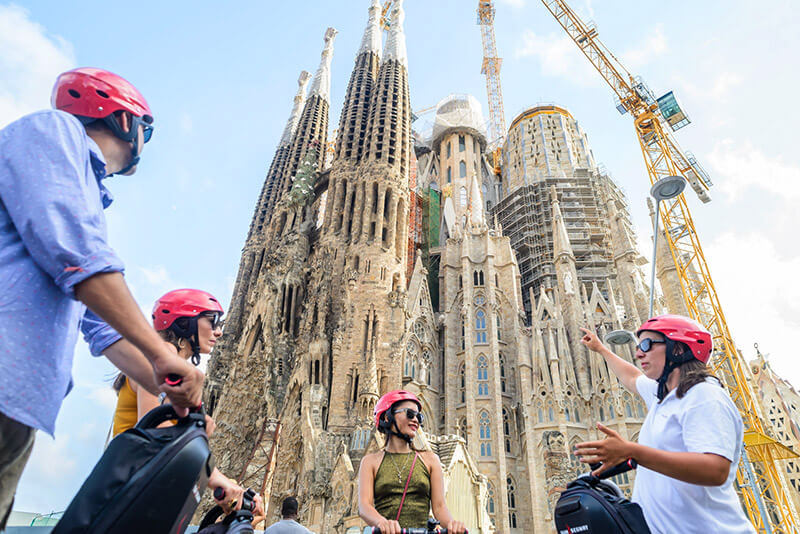 The Sagrada Familia is one of the most important monuments of the city of Barcelona, the maximum exponent of art, being a point of tourist interest that attracts people from all over the world. It is a temple that was devised by Gaudí. At the moment in which a person decides to visit the city, this is one of the key points in which he will not hesitate to take a photo.

In addition to being a luxury for the senses, it has a curious history that supports us that we will detail below.

Everything you need to know about « La Sagrada Familia »

The construction of this monument began in 1882. At first, the project was designed to follow a neo-Gothic style. However, the following year was completely reconsidered by Gaudí, who had in mind a completely different idea. Gaudí’s project was ambitious: his goal was to create a project consisting of 18 towers. Although it was really possible, for a series of problems it was impossible to give shape to all of them. In fact, Gaudí died in 1926, being unable to see his complete work.
However, this does not mean that the project has been left far behind. Gaudí left some very detailed plans to be able to continue with the construction of the temple in case he could not finish the work. These plans are very rich in details and indications. However, this project is also expensive. There are many construction experts and the contributions they have received over the years. Although an exact completion date of the works is not yet known, it was speculated on in a matter of years.

Since he conceived the original idea, more than 100 years have passed.
Key features of La Sagrada Familia

This iconic monument of Barcelona has not yet been completed and its construction completion date is still far away. However, there are some elements that are worthy of admiration, although it is possible that they do.

Of the 18 towers proposed by Gaudí, for the time being 8 have been created. According to the original idea of ​​the author, 12 of these towers were built in honor of the apostles. 1 of them would be built in honor of the Virgin Mary, another to Jesus and the remaining 4 towers in buildings as a tribute to the evangelists.

Gaudí established that each of the towers had a different height and that it was given depending on the height of the deity to which it will represent.

The possibility of accessing the upper part of certain towers was also contemplated. The objective of this proposal is to know the city of Barcelona with the best views. At the same time, to be able to access the interior of the towers we can find some details of the construction at first hand.

The concept of verticality is one of the most outstanding features of the temple. The goal of Gaudí was also to create a church that rose towards God, having the shape of a pyramid from the outside, with a high height in the naves, making the height of the towers confuse with the sky.

The construction consists of 3 facades that are worthy of praise.

Each of the facades represents different stages of the life of Jesus: the Birth, his Passion, Death and Resurrection, in addition to his Glory, Present and future. The sunlight itself has its own participation in the contemplation of the work: a measure that passes the day, the light that highlights the characteristics of each of the facades.

To provide more lighting to the ceilings, Gaudí projected spaces between the columns; in particular skylights or skylights that were conceived from hyperboloids. They have been constructed with pieces of gilded glass and tiles. Through these elements, not only does it enter sunlight, but it is also reflected throughout the entire environment.

If you have not yet visited this representative monument of the city, we recommend you to meet him on your next visit to Barcelona.